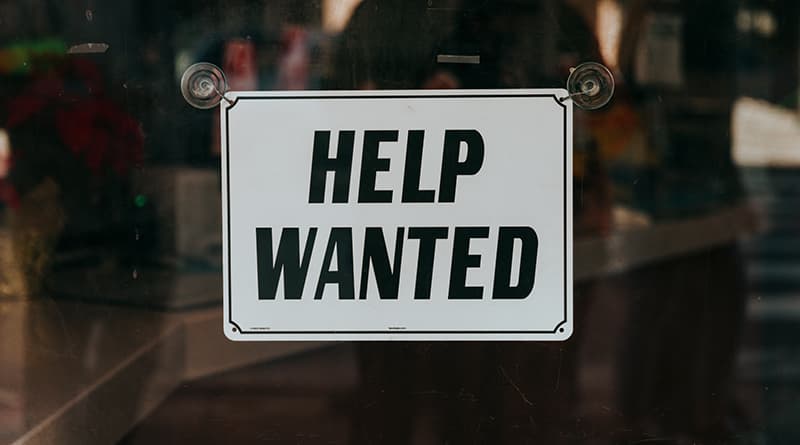 I have been the president of The Orange County Asperger’s Support Group (OCASG) for the last six years. OCASG is a nonprofit located in Orange County, California. Our mission is to help adults and teens, with high-functioning autism, Asperger’s, and PDD-NOS and their families, improve their quality of life. We do this through education, support, and social activities. We support around 2,000 individuals, located not only in Southern California, but due to online meetings, across the United States.

As the president of The Orange County Asperger’s Support Group, I repeatedly hear from adults and their parents regarding their concern and frustration of having invested in a four-year degree only to be unable to find employment in their field. Local resources, such as Department of Rehabilitation (DoR), provide support for our population. However, the services provided are directed at high school graduates not college graduates. One of the DoR programs in California is Workability. There are multiple levels of Workability support, designed for high school, community colleges, and 4-year colleges. Unfortunately, the four-year colleges in Orange County have not funded Workability for some time.

It was with that in mind, that I was determined to tackle the employment problem in Orange County. My concept was to create a job club where college graduates with ASD could meet and learn how to launch their careers. I wanted to create a club-environment to establish a support system, which would help the college grads in our community deal with the complexities of establishing a career path.

Over the course of many years, I reached out to potential partners: job developers, DoR vendors, transition initiative members, and job coaches. Despite my best efforts, no one was interested in helping.

Finally, in the summer of 2021, I found an organization willing to help; Zavikon.  Zavikon is a new job development organization whose mission is to match qualified candidates with disabilities or those who are neurodivergent with employers who believe inclusion is the future. Zavikon was founded by Rebecca Beam and Hilary Kokenka, two professional women who have years of experience in business as well as inclusive employment. Luckily for me, when I spoke to Rebecca about my idea, she immediately got it and felt that it was aligned with the Zavikon mission and strategy.

Together, with Rebecca and Hilary, we drafted a mission statement:

“OCASG Career Club is a holistic program that focuses on providing training and support to enable college-graduates with ASD preemployment, during employment, and post-employment services designed to enable short and long-term career success. Whenever possible, OCASG Career Club will leverage existing agency, vendor, and company programs. This reduces costs and teaches participants to leverage supports available in the county and state. Additionally, OCASG Career Club will focus on building participant’s skills and confidence so that they can eventually manage their own careers.”

We then mapped out a lesson plan (See figure below). 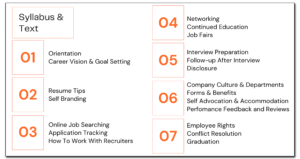 We targeted 10-20 students. I established pricing of $100 per student and offered to pay Zavikon per class. Note that previously I looked into other partners, but the prices were around $700-$800 per student, which was too expensive for our members.

I publicized OCASG Career Club to the Orange County Asperger’s Support Group members. We ended up with sixteen students. I had each student provide details on their college major, employment history, and career goals.

We finalized a syllabus which included a text book, The Complete Guide to Getting a Job for People with Asperger’s Syndrome by Barbara Bissonnette. We developed reading assignments, homework that included watching video recordings, and a series of worksheets. The course ended up consisting of nine 90 minutes sessions, distributed over seven months. (For a complete syllabus, click here.) There were also a few supplemental sessions, with job developers and benefit experts.

Initially, I thought that Hilary and Rebecca would be the sole instructors, but because I have an MBA and a degree in computer science, a successful 30-year career as a technology marketing and program management executive, and the vision for Career Club, it made sense for me to become the third instructor.

Each month we mapped out an agenda (example above). We divided up the lectures based on our area of expertise. We always tried to leave time for discussions. Initially, we divided into smaller groups. I called these groups; “colleagues.”  I wanted to communicate the importance of establishing colleagues at work. Sometimes the focus was based on the homework assignments, but sometimes the emphasis was on a critical topic. For example, we discussed whether you needed to mask or change in order to fit in at work. Another great session was about disclosure and how to advocate for yourself. Sessions were recorded as a courtesy for students who might have had a conflict.

At the end of the seven months, we had a special class where we solicited feedback and held a graduation ceremony.

Overall Career Club went amazingly well. One of the parents who audited the OCASG Career Club said that it is was better than any other job-education program that his son had attended. What made it work so well was that Hilary, Rebecca, and I, shared a common vision. We also had strong business backgrounds, so that advice given, and lessons plans delivered were based on our real-world experience. It was also helpful to have well educated participants. In general, students were highly motivated to find employment. Many of the members had technical degrees making them well suited for engineering and software development jobs.

There were several benefits of the OCASG Career Club:

My final message to is that if you see a problem in your community, rather than complaining, why not find a partner and solve it? You never know what you can accomplish when we all work together as a team. If you are interested in starting a job club, you may want to purchase a copy of The Autism Job Club: The Neurodiverse Workforce in the New Normal of Employment, by Michael S. Bernick and Richard Holden. May you find the right people to help you make your vision into a reality.

Judi Uttal is president of the Orange County Asperger’s Support Group (OCASG) a nonprofit organization improving the quality of life for individuals and families dealing with high-functioning autism. For the last ten years, Judi, a Distinguished Toastmaster, has led a Toastmaster Gavel Club designed to help young adults with ASD improve their social and communication skills.

Judi retired from a career as a high technology marketing executive. She holds a Bachelor of Science in Math/Computer Science from UCLA and an MBA from the Tepper School of Management at Carnegie Mellon University. Judi is married and is the mother of a 30-year-old son, Joshua, who was diagnosed with High-Functioning Autism at the age of three. Josh graduated from California State University, Fullerton with a major in Cinema and Television.

Helping People Along Their Neurodiverse Journeys

Exploring Alternative Routes to Meaningful Income for Adults with Autism

Nick Venturella of AutismHR.com discusses how the "gig economy" can present income and experience to those on the autism spectrum that may otherwise be unable to find employment.