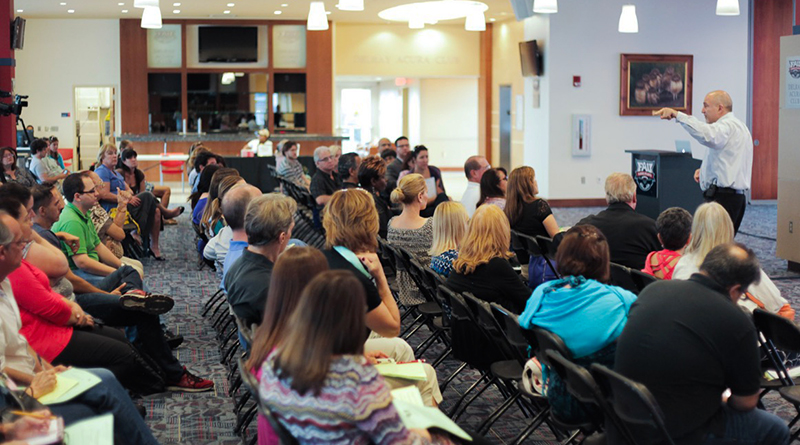 We here at DifferentBrains.com feel that “neurodiversity” simply refers to those of us whose brains think and work a bit differently. We believe in a big, friendly tent where ALL different types of brains are welcome happily! If you ask the random person on the street what an “advocate” is, you will get a variety of answers- “someone that vocally supports something”… “a person that fights for a cause”… “someone that educates people”… “ some guy on a stage talking about something”… None of these are wrong, but they are all still vague. If I am an “advocate” what do I need to do? I was thinking about that recently when I had the honor of speaking about neurodiversity at Florida Atlantic University, in Boca Raton. This was a unique event. Planned by the tireless Maryellen Quinn, it was presented by FAU’s Boca CARD branch, of which she is the director. CARD stands for the Center of Autism and Related Disabilities, and if you or someone you care about is attending college then hopefully their school has a similar organization. CARD, to borrow a quote from their website “…provides support and assistance with the goal of optimizing the potential of people with autism and related disabilities.” Their dedication, not just to the students of FAU but to the entire community, is astounding.

My presentation was held in the Acura Club room, in FAU’s beautiful new football stadium. As is my custom, I arrived early in order to allow me to meet and greet the early arrivals of the crowd. I learn so much. Many of those in attendance serve important roles in the autism community. Much of the crowd consisted of other people I would use that word- “advocate” – to describe. They are terrific! I’m just going to name a few from whom I learned.

First, I ran into Lee Rosenfeld and Debra Rosenfeld, two amazing autism advocates. They are from the Palm Beach School for Autism and they volunteer at CARD. There of course was Maryellen Quinn-Lunny, the director FAU CARD. There was Teresa Badillo from the Autism Exchange, where their motto is “Sharing info, saving time; your one-stop-shop for autism information.” Cynthia Drucker was there, the Executive Director of Artists With Autism, as was Carry Davis, the center director of Brain Balance Achievement Centers.

There were even more folks there not representing an organization. Many were neurodiverse, many were caregivers, many shared a title I wear even more proudly than advocate: parent. My presentation covered my journey with that title, parent, as I went from total cluelessness when my daughter, already a college graduate, was diagnosed with Asperger’s, to learning everything I could, to writing Aspertools. I use clips from my movie, “The Square Root of 2” starring Darby Stanchfield of ABC’s “Scandal,” to illustrate ideas from the book, along with footage of some of the amazing experts featured in our recently released documentary. As I shared tools from the book, I looked over an audience filled with people that cared about our common cause. Every one here could be given that title of “advocate.” I always include in my video Powerpoint presentations some of the experts, people, and neurodiverse themselves in their own voice whom have taught me so much. I also include local advocates. Some featured in the videos I show were in attendance this night. Pati Fizzano, the dedicated ESE teacher that not only contributed to Aspertools, but is a constant source of interesting ideas and advice for me. Ian Pyka was there as well. He is an FAU professor, focusing on exercise physiology, but his life is one that deserves a presentation all its own: from Olympic athlete, to the strength and conditioning coach for the NHL Florida Panthers and the NFL New England Patriots, to a personal trainer keyed-in to the differences in our brains.

There were also some new additions to the presentation. When I first arrived, I was introduced to a real dynamic-duo: Robert and Michelle Fellner. I asked, after meeting them, if it was okay if I mentioned them in the presentation–they said, “Yes, if there’s any way we can help other people, feel free to show our photos, to mention us, to do whatever you’d like.” I introduced them as America’s Sweethearts. It’s a great love story. Michelle is a special ed teacher by training. Robert, who walks with a walker, has many disabilities, or unique talents; whichever you prefer. Now, you all know that I think labels are a terrible way to describe a human being. If it’s helpful, that’s great. Well, he showed me his universal medical-data card, and boy, it had everything in the world on it. He’s got Asperger’s, autism, ADHD and a bunch of other things I can’t even pronounce.

It was just great to hear their love story, how these two amazing people, these two great advocates, met and eventually got married. They have happy, productive, upbeat lives. It doesn’t hurt that they both have a tremendous sense of humor. Laughter is becoming, and the positivity of their story could be felt across the whole audience. The talk lasted an hour, and to my surprise, the Q&A session after lasted twice as long. As can be common at these events, and on these topics, a few of the participants expressed themselves rather passionately, and there was some arguing. I always make sure that peace reigns, and everybody is happy. Different brains is a big, friendly tent for all of neurodiversity. Anyone with exposure to neurodiversity in general or autism in specific understands how the various communities can form factions, and how differences of opinions can sometimes be what is focused on.

It is not that surprising really. Looking across the audience one can see how different everyone is, how neurodiversity reaches everyone. And with that comes a host of different ideas and philosophies, all backed up by very strong passion. Passion can fuel disagreements and can spark arguments. But, passion is also what drives all of us towards our common goal.

And, ultimately, maybe THAT is what really makes an advocate: passion.

It is important that we- the advocates, the parents, the caregivers, the professionals, the teachers, the neurodiverse- not lose site of that common ground. That even in disagreements and debate, we stand together. We try our best to make a difference. And to have a smile and a good time doing it!

As I have in previous blogs, I want to list some of the great people that attended my presentation, and their organizations. The list is only as complete as my brain can allow (please forgive me if I do not mention you below; I took too many shots to the head in my 26 pro heavyweight fights!), so if you were there and want it known, please leave a comment below! Thanks to ALL of you neurodiversity advocates!

Professor Hari Kalva from FAU of the computer science multimedia area, was there was his son Rohan. (http://www.cse.fau.edu/~hari/)

Thomas Boiton, the CEO and founder of Citizens for Improved Transit to provide free transportation for the disabled. (http://citizens4transit.org/)

My brother, Billy Reitman, who is the founder and president of Intek Leasing. (http://www.intekleasing.com/)

Judith Galician, from Nova Southeastern (https://www.linkedin.com/in/judith-galician-274ba452), with her son Korey.

Chris Chowquan of Healthchat Pro (https://healthchatpro.com/), which is a unique video messaging service medically very-well tailored to the neurodiverse was there, in addition to all of the other patients he serves.

And of course, the person that made this happen: Maryellen Quinn-Lunny of FAU CARD. (http://coe.fau.edu/centersandprograms/card)

Back to School: How Mainstream Education has Changed in the Past 40 Years

Educator Hilda Pacheco reflects on the changes in neurodiversity awareness that she has witnessed through her 40 year career.