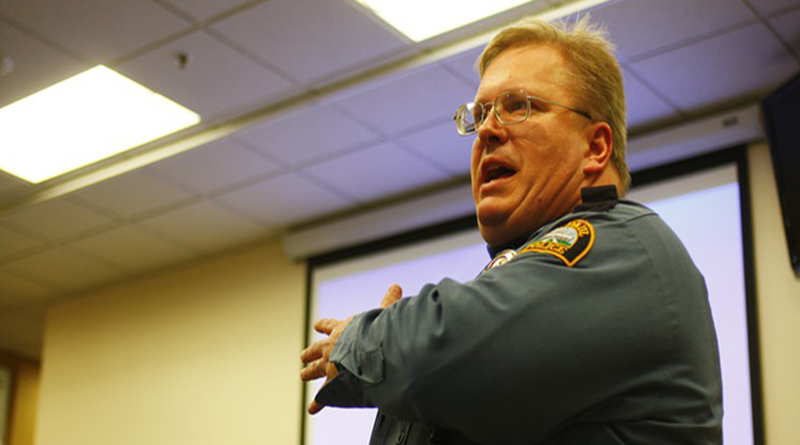 Zink is the father of two sons on the spectrum, which gives him unique insight on how cops should interact with people with autism. He knows that flashing lights, searing sirens and a harsh demeanor are likely to inflame and confuse those with a hypersensitivity to lights and sound, and he shares that knowledge with others in his department. He also lets his fellow officers know that if someone who is autistic avoids eye contact with cops or seems to ignore their commands, they might not be trying to be evasive, but simply confused and afraid.

According to a story on the citypages.com website, once, when Officer Zink was being called to intervene with a violent man at a West St. Paul group home, he blew through a line of 20 customers at a Walgreens to buy a pack of M&Ms. “This is an emergency,” he announced at the checkout, as the cashier glared daggers at him. When he arrived at the group home, he found a patient with autism in the middle of a meltdown, tearing apart the furniture and fighting the staff. Zink offered the M&Ms in truce, and the man was pacified.

On a recent Monday night, Zink led a community forum in West St. Paul with a roomful of parents of autistic children, many of whom are on a first-name basis with Zink because he’s the one they request when their kids need police intervention. A handful of Black Lives Matter activists were also in attendance with St. Paul mother Maria Caldwell, whose 18-year-old son Marcus Abrams was forcibly arrested by Metro Transit police at a light rail station in September.

Abrams, who had been standing on the tracks and not responding to police orders to get back on the platform, was taken to the ground and handcuffed. He suffered a seizure in the process, but his mother says it could have all been avoided if the Metro Transit officers had the proper training to recognize that her son was autistic.

The officer involved was eventually fired.

“This is very personal to me,” Zink told Caldwell that night. “I never want to see an instance like what happened on the MTC happen to my sons. I give it my heart and I give it my promises as best as we can. We’re not perfect, we’re all going to make mistakes.”

About three years ago, in response to the violent arrest of an autistic young man, Zink started the Cops Autism Response Education (CARE) program. That young man’s mother said her son had fled in the floodlight of a patrolling squad car, which made the cops think that he had something to hide. They chased him and, when he tried to struggle, used force, she said.

The fledgling CARE program is rooted in West St. Paul, beginning with Zink informally educating his fellow officers. It has yet to fully take form throughout the city, but Cmdr. Paul Iovino says that it’s now required training for new recruits coming up through the academy. They’re hoping to strengthen it in coming years, as more children are projected to be diagnosed with autism.

Another piece of advice the autism cop dispenses to his fellow officers is to follow up with patients about a week after they’ve calmed down from their episodes to repair any lasting fears they have of police.

This article was based on a piece published at CityPages, which can be read here.

Is “Fear Reversal Learning” Impaired in People with OCD?

Computers May Soon Detect Depression in Your Voice

Researchers at the Massachusetts Institute of Technology (MIT) have been studying and refining computer-based speech pattern recognition, specifically deep learning, to be able to detect depression or anxiety in people's speech patterns.