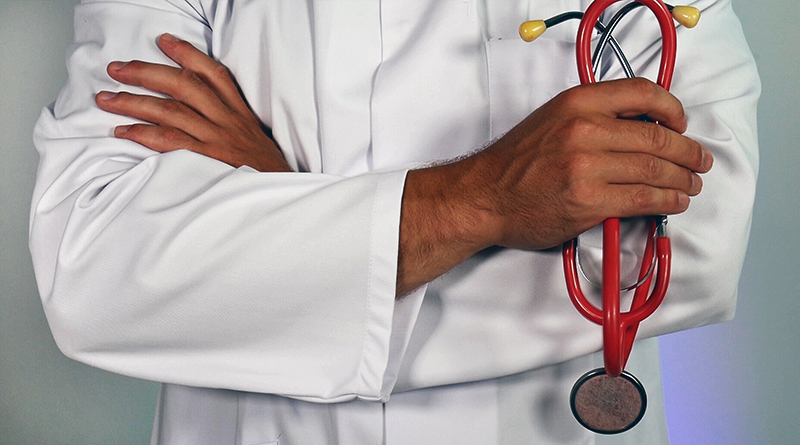 Dr. Justin Sciancalepore, a doctor who suffered a stroke at age 35, not only survived his stroke but also returned to work to treat stroke patients with a completely different outlook on what it means to be a stroke patient and a stroke health care provider.

One day, while at home with his wife Melissa discussing what color to paint their new kitchen, Melissa noticed that her husband began slurring his words and perceived that the left side of his face was drooping, two of the three classic signs of an imminent stroke. Although Dr. Sciancalepore, a pulmonary/critical care fellow at the Jefferson Washington Township Hospital in Sewell, NJ, saw no signs of stroke and told his wife not to call 911, she called 911 anyway, and paramedics recommended that he went to the ER anyway despite not showing any symptoms of stroke at the time outside of an elevated blood pressure. Sciancalepore chose not to, citing personal reasons, and his wife agreed with him.

Everything seemed fine for the next two days until Sciancalepore attended a conference and began slurring his words again and answering questions unusually slowly. Again, the team took a look at him, but he seemed fine. However, Sciancalepore became worried at this point even as he drove to work from the conference. Even though he started off work without any problems, he later had difficulty typing with his left hand. As he processed this, a “rapid response” alert sounded on the overhead and he had to rush to a patient’s room as part of the critical care team. In the room, Dr. Joan Wiley, attending physician and mentor, saw that Sciancalepore struggled getting his arms into the protective gown. “I immediately knew something was wrong,” she said, but the patient had to be tended to first. As such, they stabilized the patient and Wiley insisted Sciancalepore go to the ER with another fellow. Again, he initially resisted, but he eventually went.

It was a good thing he did. On his way to the ER, he couldn’t fully control his left leg and had to prop himself up on the wall just to keep from falling. At this point, he knew this was something bad and became “profoundly scared.”

Sciancalepore maintained clear and abstract thinking when he got to the ER, which calmed him down some. He also confirmed he was able swallow by successfully drinking some water. When he was admitted, he reasoned that there could only be one reason a man his age with no risk factors for stroke would even have a stroke: diseases that cause abnormal clotting. He asked a coworker to test his blood for such diseases; meanwhile, imaging scans revealed a a clot in his right, middle cerebral artery. Since Sciancalepore waited so long to seek treatment, doctors deemed it too dangerous to try and remove the clot and instead opted to keep his blood pressure elevated enough to keep blood flowing to the tissue near the clot so it would stay alive.

Sciancalepore ultimately stayed 11 days in the ICU, and on the fifth day, Sciancalepore tested positive for antiphospholipid antibody syndrome, a rare autoimmune disorder that damages tissues or cells that most often occurs in young women, as Sciancalepore noted. He also pointed out that clots are another symptom, and that he would have to take the blood thinner Coumadin the rest of his life.

He then spent a week in intensive outpatient therapy at the Kessler Institute for Rehabilitation in Marlton, NJ. When one of the staff there asked him, “What do you want to do when you leave here?” Sciancalepore replied, “I want to be able to hold my son and not feel like I’m going to drop him,” To that end, part of his treatment was to carry a 16-pound weight with a diaper on it. The staff at Kessler was so impressed with his attitude, they plan to include him in their 2019 calendar, which features inspiring patients.

Sciancalepore returned to work just under four months later. He underwent cognitive testing, which turned up no significant problems. He still has a bit of a challenge typing with his (non-dominant) left hand when he’s tired. His doctors see his work, both mentally challenging and physically active, as the best form of therapy. “He’s very, very lucky,” Dr. Wiley said. She said the stroke has made an empathetic man even more empathetic. For example, since he went through having a central venous line placed as a patient, he changed his description of how lidocaine feels. “It is not a pinch and a burn,” he said. “It feels like somebody is stinging you with a razor blade over and over again.”

He is also more upfront with patients regarding how well or badly they are likely to do after a stroke. He thinks they should hear the truth, and many of his patients appreciate his stark honesty. He does not always disclose his own stroke, partly out of fear they will think less of him as a doctor and partly because he doesn’t want them to assume they can do as well as he has.

One of Sciancalepore’s takeaways was his struggles ceding the control he was accustomed to as a doctor and accepting the role of patient. He recalls the large amounts of concentration he needed to perform basic tasks with his left hand following the stroke. Having experienced the role of stroke patient, he offers his unique insight to help medical students understand how frustrating their commands can be for patients. He tells patients that it’s okay if they can only manage a twitch. He does not ever underestimate how hard rehab will be for patients.

Sciancalepore talks with his fellow doctors about the significance of empowering patients to have as much control as possible the healthcare and rehabilitation process. For instance, shortly after he arrived Kessler, a therapist brought him a towel, helped him to the shower, and left him to take a shower by himself as opposed to giving him shower. “To me, that was the most liberating feeling,” Sciancalepore stated. “All I could think was, ‘Don’t fall, don’t fall, don’t fall. If you fall, they’re going to take this away from you.'”

Based his earlier interaction there, he now gives more credence to his patients’ goals and includes them more in the healthcare process. Just as he was asked, “What do you want to do when you leave here?” he asks his patients the same question, and just as he answered, “I want to be able to hold my son and not feel like I’m going to drop him,” he takes his patients’ answer into account in their treatment.

Photo by Martin Brosy on Unsplash

Autism cop: Here’s how police should interact with those on the autism spectrum

The “autism cop.” That’s what fellow policemen call Rob Zink, a member of the St. Paul, Minn., police force for 17 years. He is the father of two sons on the spectrum, which gives him unique insight on how cops should interact with people with autism.

Stephanie Cahill was told six years ago that she probably wouldn't graduate from high school, and that college wasn't an option. This bleak forecast was given to her by a neurologist immediately after Cahill was injured playing youth volleyball.