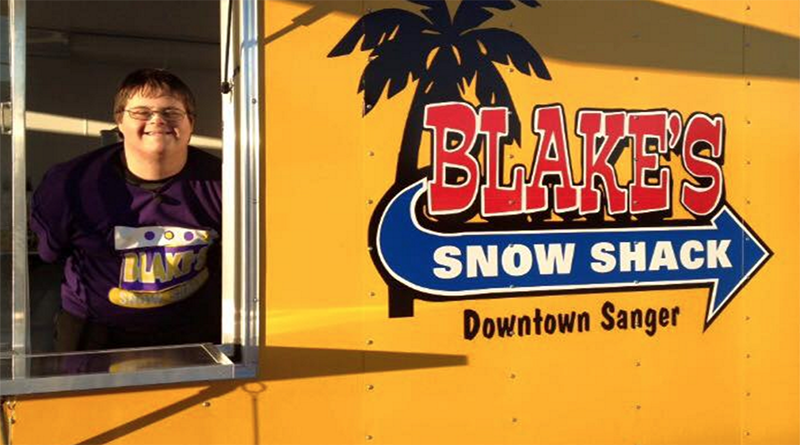 Even on the coldest of winter days in Texas, all Blake Pyron, a 19-year-old with Down Syndrome, wants to talk about are his snow cones. “Banana, [lime], root beer,” he says, listing off a few of the flavors.

As reported by Lauren Zakalik of WFAA-TV Dallas, Blake is about to become the youngest business owner in Sanger, Texas, and maybe even the only business owner in the state with Down Syndrome. On February 1st, the city council will give final approval for him to open Blake’s Snow Shack in May. The Pyron family says they’d long thought about what the plan for their son would be once he graduated high school. He has had a job at a barbecue joint in Sanger and he loved it, so they wanted it to be food-related.

They then decided to reach out to the owners of Tim’s Place in Albuquerque, a restaurant run by a young man with Down Syndrome, and the manager there looked over their business plans and gave them the courage they needed to move forward.

Blake is officially the president of the company, and his parents are co-owners. A 15-year-old neighbor is his sole employee.

For most of his life, Blake Pyron had been used to hearing from others what he could and couldn’t do. But he just keeps proving them wrong, and his mother is grateful that she can provide this opportunity for her son. “Blake has exceeded everything. He was a football captain, a prom king, now he’s a business owner,” she said. “We’ve never limited Blake.”

This article is based on the reporting of Lauren Zakalik of WFAA-TV Dallas, as reported by USA Today here.

Reality Series About Down Syndrome Wins an Emmy

The A&E reality series Born This Way, which follows the lives of several individuals with Down syndrome, has won an Emmy for outstanding unstructured reality program.