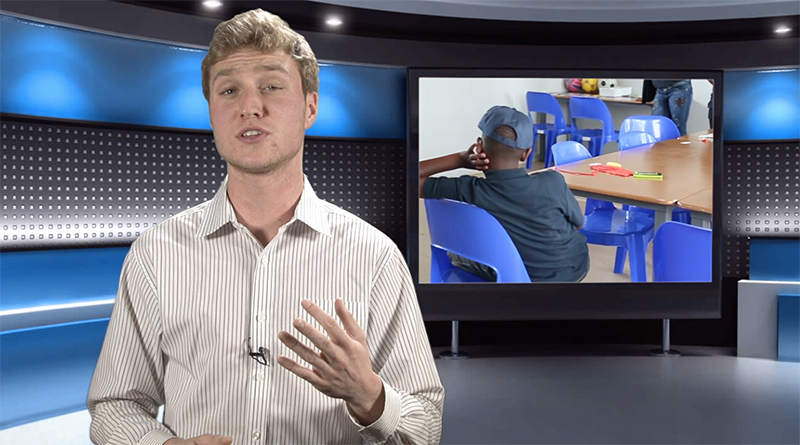 In this episode-
[00:08-00:44] A small robot helps people with autism-related communication difficulties,
[00:45-01:12] Microsoft adds features to assist people with dyslexia,

Hi, my name is Matthew Ryan, and welcome to the Week in Neurodiversity.

Let’s start off with what happened to technology this week. A company designed a robot named Leka, specifically for people with autism. It allows children to learn through games by providing sensory stimulation.

“I could totally see a kid at the end of the day handing the ball to his parents to just try to transmit something and make them understand what happened today, even though he’s unable to do that any other way.”

“Our goal is to put together all the data of all the Motis in the world and make them available for parents, researchers and doctors. We want to understand and discover patterns.”

Microsoft’s one-note program just installed a new feature called “Learning Tools,” and Microsoft believes that this new feature should be helpful for readers with dyslexia.

“We use high contrast and large fonts to make it easy to read. We also include features like simultaneously highlighting and voicing text. This is a proven technique to help students sustain focus.”

Here’s what’s going on in community news: this past Sunday, bikers in South Florida gathered for the third annual PTSD awareness ride in Pembroke Pines, Florida. Several hundred people attended the event, with the goal of raising $10,000.

“It’s a way to support our veterans, those that protect, serve and save us, we try to give back to them.”

A new school just opened in the city of Soweto, South Africa. The school not only provides benefits for children on the autism spectrum, but also provides relief for the childrens’ parents.

“So if you look at the school, you will find that it seems a bit dull for us, but for them, that is what they need.”

“All of our children are equal. And there’s no child, purely because of their disabilities, must be deterred ‘different kid.’

Celebs have different brains too. Hayden Panettiere’s speaking out for the first time since seeking treatment for postpartum depression. She says that stepping out publicly is empowering, and she is back better than ever.

“Postpartum depression was not something that I ever understood. You can never understand it unless you have a personal involvement in it.”

Tiger blood’s at it again. In an interview this week with Dr. Oz, Charlie Sheen opened up to the possibility that he might be bipolar, making him not only #winning, now he’s bi-winning.

“I’ve been described, or–or diagnosed, by enough people that–I guess at some point you have to take a look at it if it keeps walking like a duck, you know?”

And in sports: 17 year old Maya Galvan, nicknamed “The Glovin” by her teammates, lives for the game of ice hockey. She said it is because of having Asperger Syndrome that she is able to stay so focused as goalie during the game.

“Playing hockey, for me, has been a great experience and without my Asperger’s I wouldn’t be who I was today, because of the ability I have that just drives me insane to play hockey.”

A Seattle-based helmet company, VICIS, has just released a brand-new football helmet that they believe is the safest in the world. Instead of the typical hard outside layer, like a normal football helmet, the Zero-One has a revolutionized helmet design by making the outside its softest layer.

“This is a multi-layered, highly-engineered solution, and it will make a difference. We don’t have the typical helmet, with a hard shell and some padding on the inside. We can reduce acceleration, we can make a difference. It is because we’ve come about this in such a profoundly different way.”

That’s it for the Week in Neurodiversity. Thanks for watching, don’t forget to subscribe and leave your comments. You keep advocating, we’ll keep bringing the news.

Lynn University has a mission- to make sure that all students, whether traditional learners or nontraditional learners, have a chance. That people from any walk of life should have the ability to succeed, and that the University strived to be the place where the building blocks to that success were laid. The sincerity and dedication of Kevin Ross and his colleagues came though loud and clear. That’s leadership. And that is what this conference-- Lynn University’s Transitions 2016-- is all about.

(3 min 45 sec) In this episode: a Colorado student with Down syndrome hits a half court shot, a club in New Jersey looks to help those with Alzheimer’s and dementia, a young man with autism expands his pickle business, and more!

(23 minutes) In this episode, Dr. Hackie Reitman sits down again with Stacey Hoaglund, editor of The Autism Notebook Magazine, a tireless advocate for the neurodiverse, and the mother of a son on the spectrum.