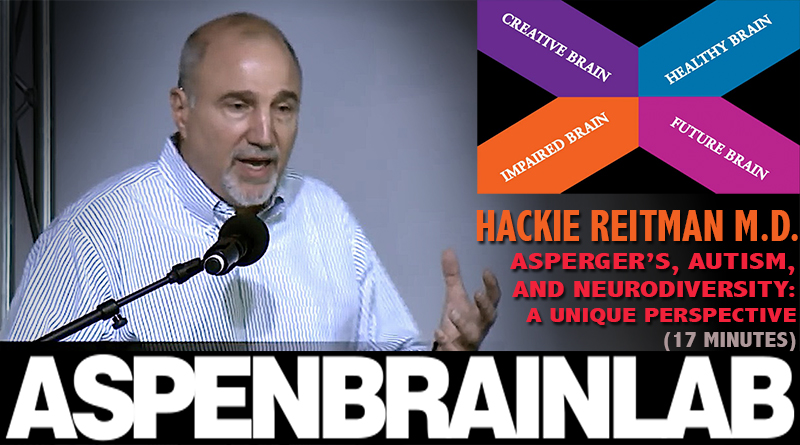 This past August, Different Brains™ founder Hackie Reitman, M.D. presented at the prestigious AspenBrainLab, hosted by the Aspen Institute. In his 17 minute talk, Dr. Reitman told the story of his journey to becoming an advocate for the neurodiverse, gave helpful tips from his book Aspertools, and explained how ALL of society can benefit from mainstreaming the differences in our brains.

The ABL recently posted the video of Dr. Reitman’s 17 minute presentation- click below to view!

(VIDEO – 3min 28sec) In this episode: a video of a teen with Down syndrome asking his girlfriend to homecoming goes viral, researchers are trying to treat PTSD with virtual reality, and more!

(3mins 33 sec) In this episode, an MRI machine helps a teen with epilepsy, a woman with Down syndrome goes for her 4th degree black belt, and Jon Stewart and Stephen Colbert host the world’s first nonverbal talk show host to raise acceptance for autism! These stories and more in this week’s edition!

(25 mins) In this episode, Harold Reitman, M.D. continues his conversation with Malav S. Trivedi, B.S., M.S., Ph.D., an Assistant Professor at Nova Southeastern University, and a researcher in their Center for Collaborative Research (CCR).