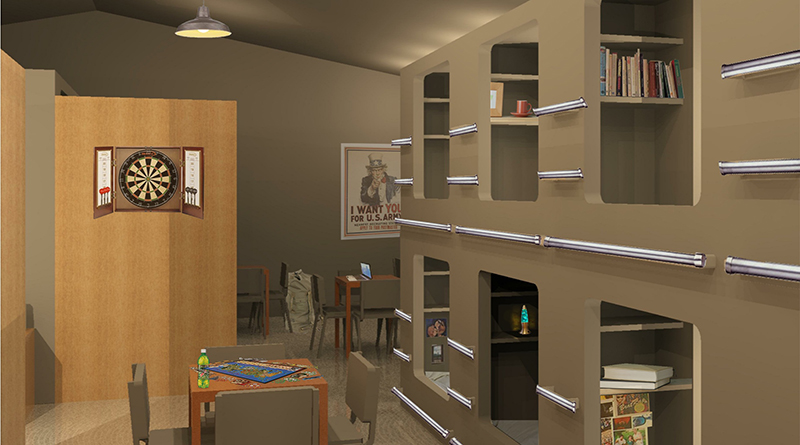 The students’ designs, which balance privacy and connection, relaxation and security, meditation and activity, replace the traditional military cots, standard-issue tents and hanging-poncho privacy dividers with individual spaces that soldiers can personalize and control. As reported by the Iowa State news service and posted on the school’s website, the class, called In Harm’s Way: Interior Design for Modern Combat is thought to be the only class of its kind and is the brainchild of Interior Design Professor and Chair Lee Cagley. The bunk and social areas of Yongyeon Cho’s design.

“I’ve been working on this for several years, since watching a TV feature on PTSD,” he said. “Soldiers returning from Iraq and Afghanistan spoke eloquently about the fact that they were never able to relax; the outpost tents never felt really safe. It struck me that what they were talking about was fundamentally an interior design problem — the combat outpost environment wasn’t supporting the troops emotionally. The idea for the class was to rethink the outpost so the combat experience can be mitigated in some way by the environment.”

Retired Air Force civil engineering technician Joseph Pasquantino, from Hartford, Conn., helped move Cagley’s idea forward. While in the military, Staff Sgt. Pasquantino was part of the engineering unit that designed and set up tent cities for bases in forward deployed locations, beginning with Desert Shield/Desert Storm. He provided the class with extensive information on combat-forward base requirements and design, which, according to Cagley, have not changed significantly since World War I. “Anyone who has been deployed knows there is no privacy, no escape from the job. And as hard as the military tries to provide some rest and relaxation, a few days here and there really doesn’t help,” Pasquantino said. “Being able to provide a customizable space for a soldier or airman to escape to daily would greatly improve their quality of life and possibly reduce the effects or occurrence of PTSD.”

The six interior design grad students researched and documented their design process while creating a combat outpost designed for 144 soldiers. They were asked to design environments unlike anything in existence, using technologies and materials not yet widely available. Their designs had to include all operations of a typical base — from laundry, billeting and mess hall to armory, helipad and medical.

The class visited Camp Dodge, in nearby Des Moines, to see a practice outpost facility used for set-up and teardown training prior to the Iraq War. Three members of the ISU ROTC program spoke to the class about the inadequacy of current outposts.

One student used technology that enables soldiers to control their environment through light and sound. Another conceived of acoustical seclusion for a soldier using headphones. One design used color and form to blend the base into its surroundings and another included a camouflage city under one roof to protect the identity of base functions from overhead attack. Several students converted wasted vertical space into useable living space and specified modular components to simplify manufacturing, shipping and installation. Some called for blast-resistant materials to increase safety. Others proposed courtyards and gardens and one student designed an underground Zen Center with space for a chapel and private reflection. Even if the solutions may not be the most practical, the students have learned that “design isn’t necessarily just a discretionary spend,” Cagley said. “Design can genuinely save life, and perhaps even prevent some of the needless suicides.”

One of the grad students, Maricel Lloyd, is a veteran, although she was not deployed into combat. (However, her husband was; he lived in the combat outpost in Mosul, Iraq.) “PTSD is something you can’t see or fix for the person,” she said. “But creating a space where they can feel safe — yet connected to battle buddies — is an important solution our studio can offer to mitigate PTSD.”

Cagley and Industrial Design Assistant Professor Will Prindle will apply for a grant from the Department of Defense to design and construct some prototypes of the students’ designs at Camp Dodge. If all goes well, a design-build studio will do the work in the spring of 2017.

Is “Fear Reversal Learning” Impaired in People with OCD?

A recent study has revealed that the areas of the brain which associate music with good feelings is unaffected by Alzheimer's disease.