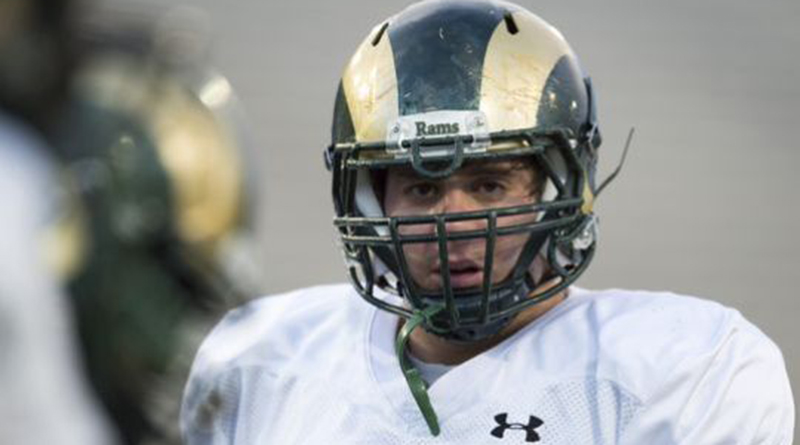 “There are a lot of people with my condition who are told they can’t do something. But with the help of my supporting family, I’ve been able to reach great heights, almost the highest a football player can go. I’m still surprised to this day how far I’ve come.”

According to Matt L. Stephens, writing in The (Fort Collins) Coloradoan, if Justin’s dad hadn’t forced him to play football in grade school, he’d probably have stayed in his basement, playing video games. Because Justin has Asperger’s and human interaction has always been difficult for him.

Justin never had many friends. Most kids went out of their way to not invite him to birthday parties. When Justin was growing up, he was the biggest kid on his block, but that didn’t make him immune from being bullied at the bus stop. Kids prey on their peers’ slightest deviations from the norm, and Justin’s fashion choice of a T-shirt, gym shorts and high tops (every day), his rarely groomed hair and his introverted mannerisms made him a target. The overbearing parent wanting their kid to succeed at athletics is a timeless tale. And in his youth, that’s how Justin felt. He hated football. Hated the coaches who didn’t want to deal with a player diagnosed with Asperger’s. Who told him he’d never be smart enough to play organized sports. Being out there was a chore to please his father, Thomas, who’d later coach him at Longmont High School. But he soon realized he not only enjoyed playing football, but he was good at it. And he could take those pent-up emotions from being picked on while waiting for the bus and unleash them on opposing players.

He was a good enough high school football player to be offered a Division I scholarship by two schools: San Diego State and CSU. Given CSU’s proximity to his home in Longmont, it was an easy decision.

Asperger’s didn’t make Justin broken. He didn’t need fixing. He was just different. But coming to CSU and meeting the perfect blend of people changed him. And he wouldn’t trade it for anything. “CSU gave him a purpose and built up his confidence with what he’s been able to accomplish,” says his mother Kara. “He’s always heard what’s ‘impossible’ for him to do, and it’s such a proud thing for us as parents to see him push through that.”

Inclusion was never an issue within the CSU locker room. If anything, his teammates and three head coaches — Steve Fairchild, Jim McElwain and Mike Bobo — are the reason he never quit football. Until junior year, he’d only leave his dorm for class, practice or dinner. But teammates convinced him to come out with them on the weekends and McElwain regularly invited him to his office for no reason other than to discuss life.

Justin says that if he doesn’t make the NFL, he’d like a job where he can meet people. “I’m not sure what kind of job that would be. Socializing took time to develop. Talking to people could be very difficult. Like all things, social skills take practice. After sharpening my skills as an athlete, I’d like to sharpen my skills as a person.”

Someone with Asperger’s wanting to meet as many strangers as they can is the anomaly anyone diagnosed strives for. Justin says, “What I’ve come to learn from talking to people is that everyone is different and they all have something to teach you. The places they’ve gone, the things they’ve seen, what they’ve done may be very different from what you’re used to. People face great challenges in work, love, leisure. I want people to remember to never give up, to keep an open mind. Don’t get discouraged, because you never know what the future may hold for you. There are always new possibilities.”

This is an edited version of the original story by Matt L. Stephens that appeared in the 11/27/15 edition of The Coloradoan.

At the recent “DC in DC” event, writer Tom King stated in a panel that the DC universe will now have a place where superheroes can deal with PTSD.

Regents at the University of Colorado spoke openly against a newly hired coach who supports a style of football linked to an increased incidence of concussions.

The choir program was started by the Alchemy Sky Foundation in April, and was made to help older adults with have Parkinson’s have a better quality life.